Can being a vegetarian improve athletic performance? There are several reasons people decide to stop consuming meat, and turn to a vegetarian diet. They might do it because they feel guilty eating other animals or simply to feel better about themselves.

Those choosing vegetarian diets know they still have to allow their bodies to have the necessary amounts of protein, and this can take planning. Protein helps build muscles, which is crucial to the body and especially important for athletes. This leaves some wondering if a vegetarian diet can in fact work for athletes.

Anyone who follows vegetarian diet also has to take extra steps to avoid other possible deficiencies that might occur with the lack of a meat-oriented diet such as zinc, iron and B12, which can negatively effect strength and performance.

With these concerns, poses the question, can a vegetarian  diet influence a athletes perform as well as their meat-eating opponents?

The answer to this question is relatively obvious, as people do not realise how many athletes consider themselves vegetarians.

Lane Trembley, business major and black belt in Karate, has been a vegetarian for seven years and credits his diet for his athletic ability.

“I turned to vegetarianism because my trainer said it could help improve my performance,” said Trembley.

Trembley says he started feeling better a few months after turning to vegetarianism.

“When I eliminated meat from my diet, I started performing better and I noticed an increase in endurance,” he said.

Many athletes have actually been vegetarians at the peaks of their careers, disproving those who think a vegetarian-based diet negatively effects an athletes performance. Try a green smoothie for a high protein breakfast

Do you know your good fats? 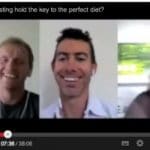 Curb Those Cravings With the Best Healthy Homemade Chocolate Fix Ever!