According to studies published by a team of researchers, including Dr. Douglas Paddon-Jones at the University of Texas, there is evidence that consuming 25 to 30 grams of protein per meal helps to maximize muscle building (or synthesis) in both younger and older adults — and that’s even without the added benefits of exercise.

According to Paddon-Jones: “The concept of 30 grams of protein at each meal is still kind of a theory, but it started with a study where we used lean beef as a protein source. Prior to that, we used specialized amino acid formula, which tasted terrible, but this time we wanted to see what happened with real food. We found that with a single meal of 4 ounces (about 100 grams) of lean beef, which provides about 30 grams of lean protein, we got a 50% increase in lean muscle tissue synthesis in both older and younger adults.”

Is there any benefit to bumping the protein up even more? “Since we know that no one can get a steak as small as 4 ounces in a restaurant, we did other studies on 12 ounce portions, but found no change,” Paddon-Jones said. The researchers also said that an intake of less than 20 grams per meal actually blunted, or reduced, protein synthesis in older adults.

Why the increased need for protein as we age? The aim is to prevent or minimize sarcopenia, or age-related muscle loss. Throughout our lifespan, our bodies are in a constant state of building up and tearing down muscle. In our younger years, it is fairly easy to at least maintain a balance between build-up and break-down; as we age, however, our bodies start to break down muscle tissue faster than we build it. It was assumed we lose the ability to build lean muscle as we age, but in fact, it seems our bodies are still quite capable of generating all-

important muscle — that we need to maintain strength, vitality and independence — well into our senior years, as long as the amino acids (the building blocks of protein) are available.

For many people, getting protein at dinner or lunch isn’t much of a problem. With a cup of milk providing 8 grams of protein, an egg 6 grams (all from the white), and a ¾ cup (175 gram) serving of most yogourts about 6 to 8 grams, however, meeting protein targets at breakfast can be a challenge. So, older adults should consider choosing more protein-rich options, such as Greek-style yogourt (18-20 grams of protein per 175 gram serving), cottage cheese (30 grams per cup), or even a scoop of protein powder to start their days. 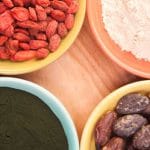 Why I eat Superfoods: An elite athletes perspective