Why I Do Not Eat Wheat Angela: Wheat… it’s a delicate topic, and a topic we feel well worth looking into. The aroma of toast & vegemite wafting under your nostrils in the morning is enough to make anyone’s heart sink when you’re avoiding wheat. But hey, we’ve come to the conclusion that we are better off without it, & we wanted to share with you why.

Resounding feedback from health and wellness circles worldwide is that wheat makes you sick and fat! I have never heard anyone say they have taken wheat out their diet and felt like crap. I always hear things like: I lost 5 kilos; I don’t have brain fog anymore; my skin is glowing; my asthma or joint pain has gone…

Modern day wheat isn’t the same as wheat from the 60’s. It’s so far removed from it, after years of geneticist’s hybridisations to increase yield (make it easier and cheaper to grow). Wheat gluten proteins experience considerable structural changes with hybridisation. “Modern day wheat contains higher quantities of genes for gluten proteins that are associated with celiac disease” 1. Could this be the cause of increased cases of celiac disease and gluten sensitivities?

If you’re interested in finding out more from an expert in the field then we recommend the book “Wheat Belly” by Cardiologist Dr William Davis, MD. He treats his cardiac patients with diet alone and the message he voices is quite clear: “don’t eat wheat and reverse heart disease”.

His story is compelling as he followed a low fat diet including lots of healthy whole-grains while running 3 – 5 miles everyday and ended up with diabetes! He also treated his patients with a similar ‘recommended government’ diet and watched their health decline. Dr Davis had a light bulb moment and eliminated wheat from his patients diets and saw miracles happen. These changes included patients with extreme joint pain go from hobbling to running among a long list of radical improvements.

If you are one of the very few that do not notice any major changes to your health when eliminating wheat then rest assured, as there will be metabolic changes occurring. Blood sugar levels will drop, inflammation and blood pressure will reduce and you’ll benefit from improvements in nutrients absorption.

Here’s a challenge – try and eliminate wheat from your diet for 30 days and see how you feel. It’s easier than you think and you’ll soon gravitate to a myriad of alternatives that are readily available. Breads, pastas and baked goods are the best place to start and can be replaced with whole foods like meat, fish, vegetables and fruits.

Check out the food diaries below for a wide range of ideas to get you started:

You can also try making wheat-free alternatives using almond meal and coconut flour instead of conventional flour. We have some awesome recipes here to get you started on your new health journey 🙂 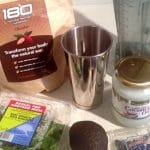 The Mother of All Healthy Protein Breakfast Smoothies

I’m unsubscribing from your emails based on this false and misleading article demonising wheat for no good reason.
Unless you have celiac disease there is no reason to avoid wheat.
Stop jumping on the low carb band wagon and maybe look at what the research actually says about wheat and carbs. There is no evidence that indicates you should avoid it.

I personally haven’t eaten wheat in 10 years. If I eat wheat 4 hours later, I am cramping and in digestive pain for a week after. I am a nutritionist and I have seen great results in clinic when taking wheat out of clients diets:

Great article and great response above.

At 22 I was having the same joint pain as my 80 year old grandma and terrible headaches which would keep me home from uni and work.

I am 26 now and no joint pain and headaches are few and far between. I attribute this to eliminating wheat and I recommend anyone facing recurring health problems like these to take wheat out of their diet as a first step.

It works for so many people both that I personally know and have heard about. If you can eat wheat and ‘feel’ unaffected by it, then that’s really great for you- I mean it! I just ask that people don’t discount it for those who it has worked for.

To get the best results it would be best to exclude all gluten. Angela 🙂

I am not celiac but eating wheat in small regular amounts leaves me cramped and in horrendous pain. I thought I had a terrible muscular disease until I gave up wheat and other grains and found the culprit. But I do not have celiac disease at all. One dose of wheat gives just really bad cramps, more than that leaves my whole body in spasm. So I suggest anyone who gets physical pain to give it a go.

Thank you for sharing! Angela 🙂

I eat small amounts of organic wheat and have no digestive issues. I think promoting wheat as the enemy is misleading. I think its the chemicals in our diet that cause the most problems. Artifical additives and even chemicals sprayed on our produce. I challenge anyone having digestive problems to just go organic with there food and not cut out food groups.

Hi Chantelle, Thanks for your comment. I agree artificial additives and chemicals sprayed on produce are problems too. I am not anti grains. I just find that a lot of people find wheat and organic wheat a problem to digest for the reasons outlined in the post. I have grains in my diet just not wheat. Spelt, kamut, rice, quiona and buckwheat work for me. 🙂