This 180 gluten-free Christmas pudding is surprisingly light and really delicious! This is a seriously tasty and healthy (and apparently not that hard to make in Carolines words) pudding…

You need a few bits and pieces with this recipe but don’t worry, it’s really easy to make.

Put the oven on to 160° to heat up. Then you need a pudding bowl, a bowl to mix everything into and a bowl to place the pudding tin into for when you bake it in the oven. You also need some aluminium foil to cover the pudding pan if you don’t have one with a lid. Put the dates, bi-carb and boiling water into your blender and set aside for the moment

Beat the almond butter and vanilla together to form a smooth paste (you can add the stevia here or later on but I would add it after the dates go in because it may get too sweet). Beat the eggs together and then add this to the mix a little at a time.

Then grab the blender and mix the dates with the water and bi-carb. This will make a delicious date juice liquid to add to the butter. Add the dates to the butter and egg mix and stir together.

Now fold all the dry ingredients into the wet ingredients bit by bit. Everything goes in and once it’s mixed spoon into your pudding bowl.

Boil the kettle again and grab the second bowl, you need to cook the pudding in a tray of water and I just put a bowl in a bowl to make it easy.

Cover the pudding with the foil. To do this you can wrap the foil around the top twice and secure it by pressing down the sides. Be careful that the water pan the pudding is in never boils, because you don’t want water from the baking tray to get into your lovely pudding.

Bake the pudding for about 2.5 hours. It will just gently steam itself in there.
Once the pudding is finished, take it out and let it cool a bit. Now if you want to eat it that day then gently run a knife around the edges, put a plate over the top and tip the pudding out but if you are making this to serve in a day or so then store in the fridge in the pudding bowl. When you are ready to eat, pop the bowl back into a second bowl of boiling water and let it heat up over an hour or so, you can out it back in the oven at this point if you want to reheat before serving.

To serve I would grab some fresh or frozen raspberries and some greek yogurt drizzled over the pudding slices. 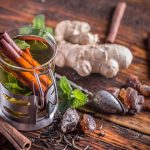 5 Herbs and Spices to beat Colds and Flu this Winter