Below are a selection of the most recent media articles. Please contact us if you have any questions or media related enquiries.

Join Stuart Cooke in this broad ranging interview as he talks to Harry from Bay FM situated in Byron Bay. They discuss the differences that occur today across health and nutrition and how what we are being advised to do may not be the right approach if we’re looking at optimising our health.

In Ep 36 of the RAW Barbell Club Podcast get to chat with Stuart Cooke, The co-founder of 180 Nutrition. He is the host of the amazing 180 nutrition ‘Health Sessions’ podcast, interviewing the likes of Wim Hof, Kelly Starrett and so many more. He is a wealth of information!

Today we are super lucky to have not 1 … but 2 fantastic guests with us … the founders of the awesome brand 180 Nutrition and the masterminds behind the industry’s cleanest protein superfood. Guy and Stu are joining us today to chat about health, the business of health and productivity hacks.

Making a Difference On a Global Scale

Help, share and inspire! Prepare to be inspired as DK and LT delve deep into the successes and struggles of pioneering new food paradigms. Understand the how and the why behind Guy’s successful nutrition company.

In this week’s episode I catch up with Guy Lawrence, co-owner of superfood company 180 Nutrition. This episode is so much more than just a recount of his successful health business. In fact it’s a story he hasn’t shared in a forum like this before.

The Small Businesses That Are Thinking Big In Awards 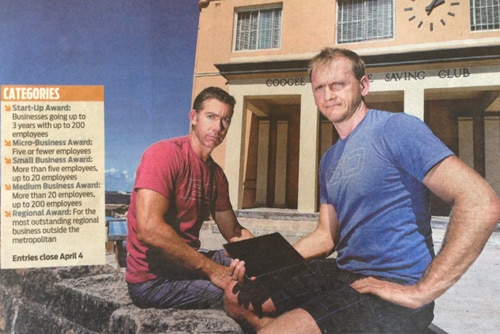 A drive to succeed and a determination to overcome setbacks that crop up along the way. These are the qualities of successful business owners – from sole traders running a small venture at home to medium size enterprises looking to export.

Regardless of a business’s size, age or profitability, they are not only a crucial part of the national economy, but also our identity as a nation of innovators and optimists.

Australian business owners have been invited to stand up and be recognised in the Annual Telstra Australian Business Awards.

The idea behind NSW finalist 180 Nutrition came to Stuart Cooke and Guy Lawrence while they were on patrol for Coogee Surf Life Saving Club in 2010.

They manufacture high-protein superfoods from 100 per cent natural ingredients and hope the awards process will help them refine their business procedures.

“If two guys from the local surf club with an idea can turn it into a million-dollar business that is recognised by Telstra then hopefully that can inspire anyone with a business idea to put it into practice,” Mr Cooke said.

He said that social media has been essential to their success and they “ran the business from an iPad”.

The winners in each state and territory will be announced in July and will go on to the national awards, which will be held in Sydney on August 22.

From the beach to the boardroom These entrepreneurs are riding the crest of an e-commerce wave with their online nutrition company, 180 Nutrition.

Their range of protein supplements has been an internet sensation, amassing more than 7000 customers, industry plaudits and a healthy balance sheet in just three years.

Stuart Cooke and Guy Lawrence in their lifesaver gear.

Impressively, Cooke and Lawrence have never spent a cent on online advertising. Instead, they have relied entirely upon social media to drum up business.

“We wanted to build a community via social media,” Cooke says.

In this short interview Guy Lawrence talks to John Stanley the host of 2UE’s Your Business Day. They discuss how 180 Nutrition have set up and run a thriving business using social media as the only form of advertising… Personal trainer Guy Lawrence was working with cancer patients when he decided to recommend protein powders, in combination with exercise, to help them recover their health.

But when he took a closer look at the labels of many of the powders on the market, he was appalled at what he found. ”They had so many chemicals, artificial sweeteners, fillers, thickeners and preservatives, I thought they couldn’t possibly be healthy,” he said. ”I was looking for something pure, with good ingredients, without all those potentially harmful additives.”

Despairing that he could find anything to fit the bill, he paired up with a friend, Stuart Cooke, and formed 180 Nutrition to produce their own protein powder, with natural ingredients including whey from grass-fed cows, almonds, flaxseed, sunflower kernels, pepitas and sesame seeds.

Selling online from their office in the eastern suburbs, it immediately took off and is now stocked in hundreds of health-food shops around the country. As well, they are getting orders from the US and Canada.

”It’s been incredible,” Mr Lawrence, 38, said. ”We found people really wanted a wholesome product, one they knew they could rely on, that’s clean and safe. In just the past 12 months alone, we’ve experienced 250 per cent growth.”

The pair has been approached by manufacturers in the US keen to produce their protein powders there. ”We’ve heard a lot of people talk about the chemicals in other protein powders causing bloating and skin rashes and other problems,” he said. ”But we’re proud that everyone seems so happy with our product.” WHILE checking out protein powders and shakes to build the strength of chronically ill clients, fitness trainer Guy Lawrence was shocked to discover how many contained sugar, preservatives and synthetic chemicals.

As a result, he decided to muscle in on the industry himself by calling on the help of a nutritionist and health industry practitioner to create a formula using natural, organic and raw ingredients.

Two years on, the protein powder produced by 180 Nutrition, the company Lawrence launched with graphic designer Stuart Cooke, is taking the fitness sector by storm. They have even had an inquiry from the office of US mind and body guru Anthony Robbins.

“It’s amazing how quickly it has taken off,” Lawrence, 37, says. “A lot of people want optimal health, and they want a really wholesome product to help them. Our business plan was to sell over the internet, driven by social media.

But we are also being taken up by a lot of CrossFit gyms, whose members follow a Paleo diet [also known as the caveman diet] devoid of processed food, as well as health-food and supplement stores. And we have received so many orders from overseas that we’re now setting up distribution points in different countries.”

The formula for 180 Natural Protein Superfood – which can also be used by slimmers as a meal substitute – includes grass-fed whey protein isolate, flaxseed, almond meal, sunflower kernels and sesame and chia seeds, all sourced in Australia and New Zealand.

With their product backed by nutritionist and naturopath Tania Flack, Lawrence and Cooke are keen to educate people on healthy eating. “We run regular exercise, nutrition and psychology blogs, which are proving very popular,” Cooke, 39, says.

Gold Coast gym owner Mandy Kinzett stocks the 180 protein powder. “I know a lot of gyms that get it,” she says. “And the number seems to be growing all the time.”