Food Diaries Of An Elite Crossfit Athlete with Chad Mackay

Elite Crossfit athlete and all round great guy, Chad Mackay shares with us what he eats in a typical day of his life including pre and post workout.

Stu: You know, you do a huge amount throughout your day. What does your typical daily look like? What are you eating and how much do you eat?

Chad Mackay: Well, in the off season I’ll tend to eat a little bit more. During the season, I try and weigh and measure most of my meals. Otherwise, I just feel like I can overeat quite easily. So, I just need to be quite strict on what I do eat and at what times.

A general day would be five meals, and those meals would be spaced about four hours apart. Breakfast will be about a quarter past 5 in the morning where I’ll have a shake, a banana, and a handful of nuts. About an hour before training in the morning I’ll have just a really small snack, kind of pre-workout, and then post-workout I’ll try and have a full meal, whether that will be chicken or lamb. So, some type of flesh. And then a big salad, sweet potato, and that will be kind of drenched in olive oil and avocado. And I’ll have a piece of fruit after I work out.

Normally something specific before, pre-workout will be normally banana. And I’ll probably have about a third of a banana before; exactly an hour beforehand. And then I’ll have about probably 40 grams of weighed protein, so that’ll be chicken or lamb or beef.

And then, post-workout will be a healthy shake, a 180 protein shake, and then a piece of fruit as well and a whole meal. So, that’ll be straightaway. I’ll normally still be breathing pretty heavy to get that meal in.

Guy Lawrence: Where do you get your carbs from? So, mainly sweet potato and fruit and veggies?

And then, post-workout will be a shake, a 180 shake, and then a piece of fruit as well and a whole meal. So, that’ll be straightaway. I’ll normally still be breathing pretty heavy to get that meal in.

Guy Lawrence: Do you eat any grains?

Chad Mackay: No grains at all.

Chad Mackay: No grains at all.

Guy Lawrence: Yeah, yeah, yeah. You know, because I only raise it as well because there’s a common myth that you need, traditionally, if you’re a high-end athlete that grains are one of the main sources of energy.

Stuart Cooke: Hmm. When did you eliminate your grains, Chad? And, I guess, why?

Chad Mackay:  I personally eliminated grains, it would have been around about five years ago. I looked into, when I first started CrossFit. The initial two weeks I lost probably three or four kilos in that initial two weeks and then I slowly tapered off after that. And then I kind of got introduced to the Paleo Diet.

So, my stomach definitely isn’t as bloated anymore and that’s probably one of the biggest things that I found is that I didn’t have that bloated feeling.

Stuart Cooke: Do you have dairy in your diet, or much, or little, or? This podcast features Chad Mackay who is best known for being a Fitness Instructor, was born in Australia on Tuesday, December 8, 1981. Australian fitness instructor who is best known for running a gym called CrossFit Active in Sydney, Australia. He has also amassed over 40,000 followers on his Instagram... Read More
Share:
Related Articles

Expert, public speaking & food: It’s all part of the process 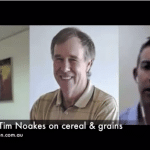 Avoid these two foods and change your energy and health forever! 2 Minute Gem with Tim Noakes